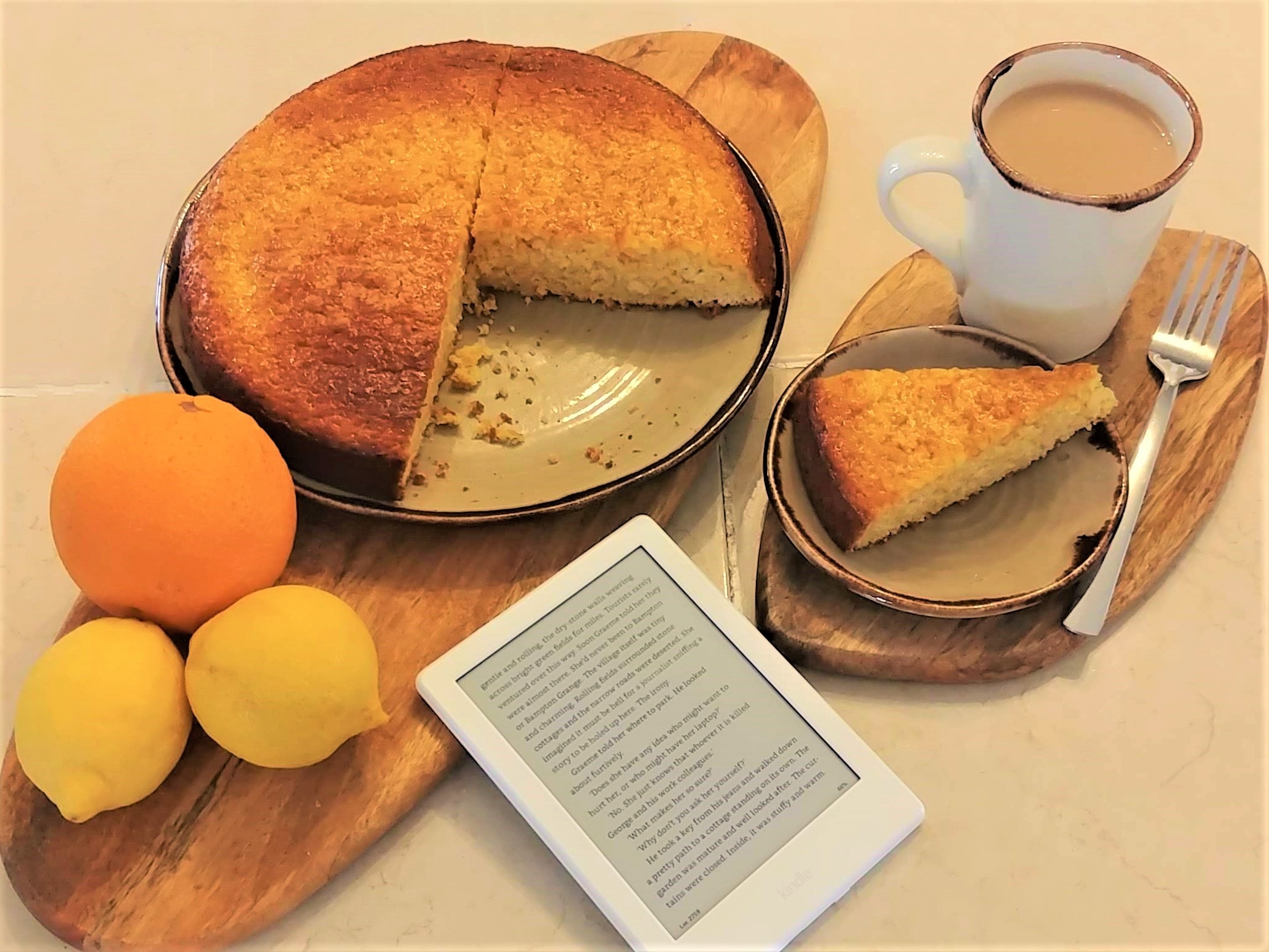 So, while we’ve been keeping safe and secluded at home in a bid to do our part to help contain Coronavirus, we’ve been doing quite a bit of baking…

Some old favourites, some new ones, some hunted down specifically to make use of the ingredients we can lay our hands on easily, and some more successfully than others!

This recipe was one that I found not long after we moved here when we were Mediterranean-dwelling newbies and far too excited to be proud new owners of orange and lemon trees 😉 .  Importantly for me, it was one of the few recipes for orange cakes that I came across that didn’t have nuts in it; most seemed full of ground almonds (not great with a nut allergy!).

But, believe it or not, we’ve been here a year and hadn’t got around to trying it out.  Not until we found ourselves guest-less and halfway up a mountain with nothing but each other, oodles of time and a lovely view for company.

For a first attempt it’s not half bad!  It’s moist and orangey (but not too overpoweringly so).

**EDIT:  And here we are some months later, now in Lockdown version2.0, guestless once more and heading into Winter.  So, because neither of us eat Christmas Cake or Christmas Pudding, we’ve decided to ‘Winterise’ our trust Orange Cake.

For the Winter Spiced Version:

*Apologies for the lack of ‘in progress’ photos – it was a first time bake and we weren’t planing to put the recipe on the blog.  But thanks to everyone who requested it.  We’ll take pics next time we make it (which I’ve a feeling won’t be too long!)

Prepare a 28cm springform cake tin by lightly buttering the base and sides, or spraying with cooking spray (whichever you prefer).  The recipe suggested lining with baking parchment, but this was a good non-stick tin that’s not been used too often yet, so I didn’t bother and it came out absolutely fine.

Mix the sugar and eggs in a bowl with an electric mixer until light and fluffy.

Add the butter to the bowl and mix thoroughly to combine.

Sift the flour and baking powder together and add to the bowl and fold it in.  It’ll be quite a stiff mixture at this point, but there’s plenty more moisture to come!

Stir in the yoghurt to combine and put the mixing bowl with this cake batter in to one side for a moment.

Prepare the whole orange: thoroughly wash it and scrub if necessary.  Leave the skin and pith on.  Cut it into small pieces and remove any pips.

Put the orange in a food processor and blitz until it’s a grainy puree.

Take the mixing bowl with the stiff cake batter in and stir this pureed orange into it until it’s evenly combined.  It’ll loosen up as the puree is added and begin to look more like an unbaked cake!

Finally, if you’re making the Winter Spiced version, just add in the 1/2 teaspoon of cinnamon and 1/2 teaspoon of all spice (too much more than this and the cloves in the all spice begin to remind you of having toothache!), so don’t be too heavy-handed!

After 50 mins, test the centre of the cake with a bamboo skewer.  If it comes out clean with no trace of cake, it’s cooked.  If it has some cake mix stuck to it, return the cake to the oven for another 5 minutes before testing it again.

Leave the cooked cake to cool for 15 minutes to allow the cake to shrink back from the sides of the tin before trying to remove it.

The cake is delicious enough on its own with nothing else – although a dollop of cream always seems to make everything taste better!

And if you’d really like to elevate it, squeeze the juice of 1 orange into a pan, add 100g of sugar and bring to a simmer to reduce the liquid to a syrup.  Then spoon / brush this onto the top of the warm cake before allowing it to cool completely.

And just because it’s almost Christmas, and this recipe is having a ‘Winter Spiced’ version make-over, the glaze wouldn’t be proper and fitting for the festive season if it didn’t have some booze in it!  So just a single tablespoon of brandy, or an orange flavoured liqueur like Cointreau if you’re not a fan of brandy, makes the glaze even more festively delicious.

Alternatively, if you have some (homemade is best!) marmalade, heat a little in the microwave or a small saucepan and glaze the cake with that.

The cake cuts most easily once it’s cooled completely (assuming you can wait that long!).

A big thank you to everyone who requested the recipe via facebook and posted photos of their own bakes in the comments on these two posts!  It’s fair to say that they look VERY tasty – and there are some great suggestions of alternative twists too – thanks guys!