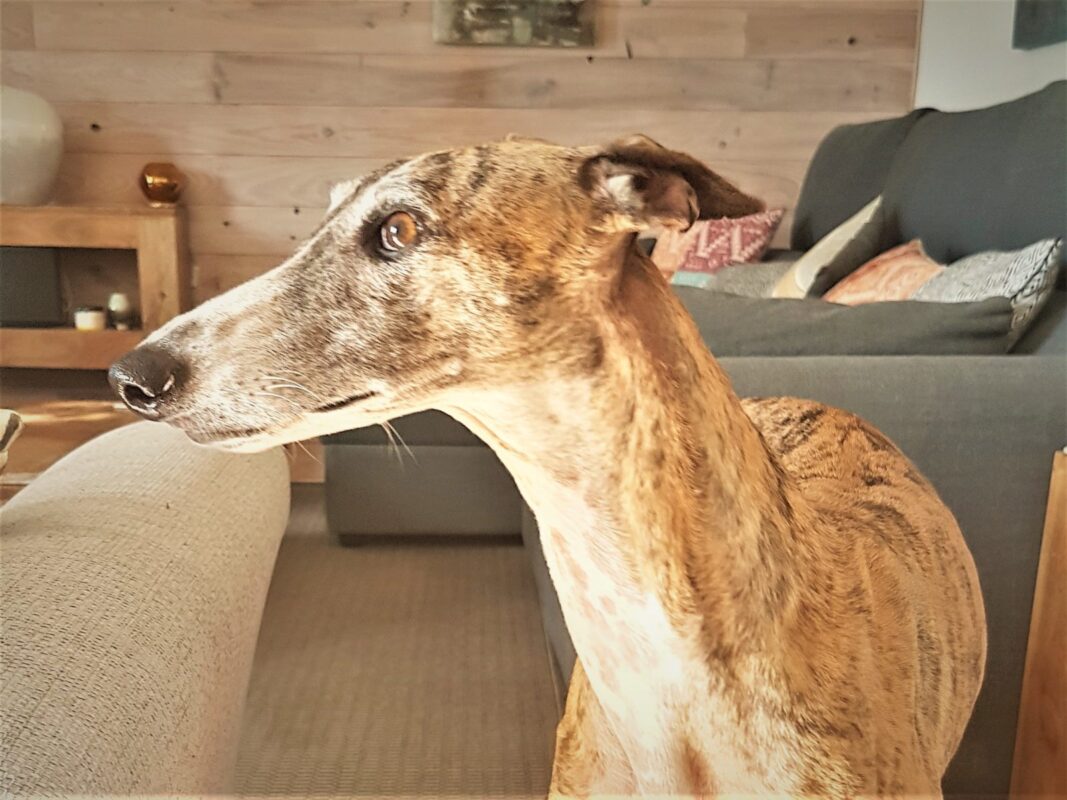 When we arrived in Spain we were quite a small little family – just the three of us; me, Shaun and Benji (our rescued, ex-racing greyhound).

We’ve been steadily growing ever since…

Florence came with the house

When we bought Finca Gran Cerros, the previous owners had a lovely ginger cat who was an adopted stray and had lived here for years.  She prefers to be outdoors and ventures inside only when it’s either too cold or too hot!

Being worried that she wouldn’t adapt well to their new life in the UK, they asked if we’d adopt her.  We gladly did, so effectively Florence – our gorgeous ginger cat – came with the house.

But Florence isn’t our only adopted cat.  Harold, a chatty little Burmese, was also a former resident here, although being very much an indoor cat, he was  destined to return to the UK with the previous owners.  But on moving day, he had other ideas…

So Harold became our second adopted cat and, despite being the smallest of the family, he now well and truly rules the household!

Harold and Benji have been firm friends from the day that we moved here and he regularly joins Benji’s evening walks, chatting away the whole time, obviously!

After getting to understand more about the plight of galgos (Spanish Greyhounds; one of the most persecuted breeds in Spain), we were keen to offer a loving home to another rescue, and Gracie came to us just a week ago.

She had a hard start in life

Galgos are used to hunt hares in the Spanish countryside. They’re seen as working dogs and often spend their lives in damp, tiny, dirty holes or windowless shacks deprived of daylight, exercise and affection. They’re typically fed only water and stale bread to keep them ‘keen’ for hunting.

Sadly, galgos are still viewed by many as a second-class animal and few Spaniards will own them as pets. They are bred carelessly, used for hunting and at the end of the hunting season those deemed worthless or too costly to maintain are ‘disposed of’ or abandoned.

Gracie was one of the lucky ones.  When she was no longer useful to the hunters she was rescued and found her way into the care of Ann Marie Payne who runs a rescue centre for galgos called Ann’s Canine Care.

During her time at Ann’s Canine Care, Gracie was registered, vaccinated and neutered but more importantly she began to learn for the first time what being in a loving home is all about.

Everything was, and still is, very new to Gracie.  She’d not been used to affection, nor being in a home, having food and fresh water readily available, or even a comfy bed of her own.

Ann does a fantastic job in fostering the rescues and preparing them for their forever homes.

It’s still early days, and Gracie’s still finding things very new and is sometimes startled and timid.  But it’s wonderful to see her confidence grow day by day and she’s already starting to get used to her new life with us.

Just like Harold, she’s already made friends with Benji and takes a lot of her behavioural cues from him.  Benji’s a complete gentleman and so Gracie is picking up some good habits and social skills.  She’s already got quite accustomed to the sofa…

It’s an honour to welcome her to the family!

We can’t wait to see the Gracie that she becomes as, with more time, patience and nurturing, she shows us more of her unique personality.

So rest assured that although Finca Gran Cerros is their home, our (growing) family of pets know the ground rules; no guest interaction unless it’s asked for!

And if it is asked for, they’ll be only too happy to meet you!