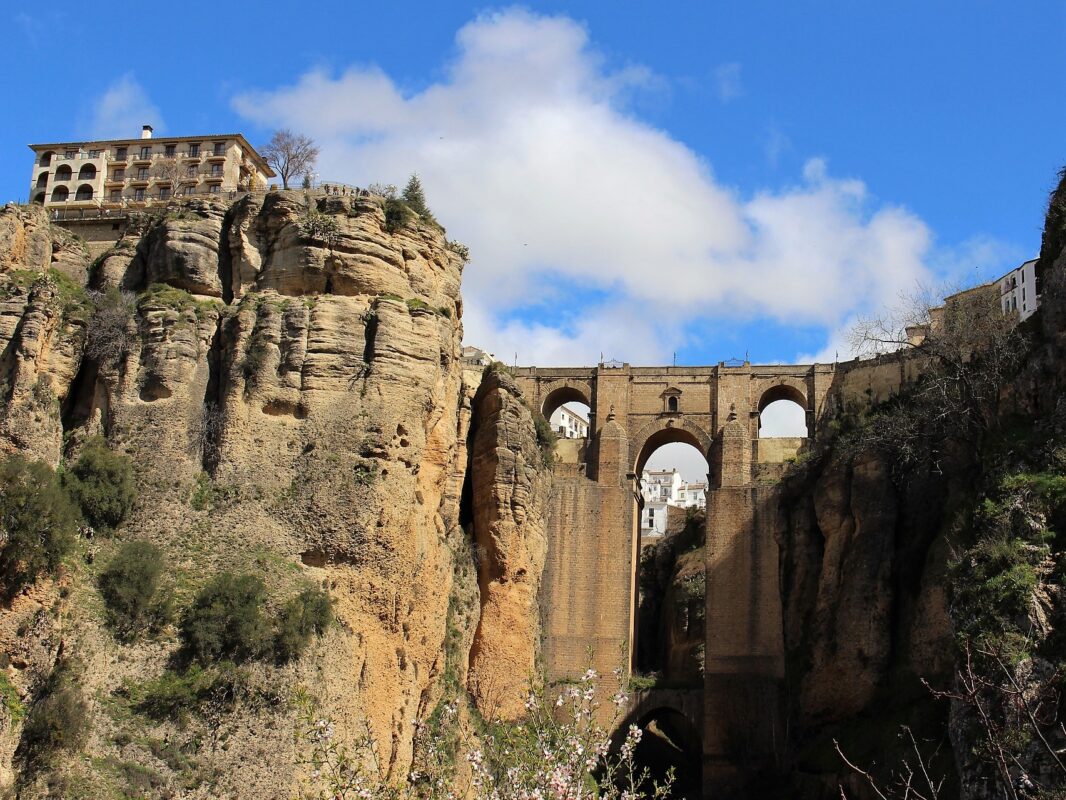 Those willing to venture a little further afield will be rewarded with an unforgettable visit to this historic Grande Dame of an Andalusian town.  Around an hour and 20 minutes from Finca Gran Cerros, it is well worth the drive.

Ronda is simply breathtaking.  Famous worldwide for its gorge, dramatic views and palatial, bustling old town, it’s one of our favourite places to return to again and again.

The town sits atop a 100m deep ravine, El Tajo, that splits the town in two, spanned by 18th Century Puente Nuevo, ‘new’ bridge.  It boasts no fewer than eight museums and more than 20 historical monuments.

Next to the famous bridge, to the South, is the old town.  Once home to Ronda’s titled families, the streets are jammed with cloistered convents, churches, townhouse mansions and palaces.  One to visit is the Palacio Mondragon which, although modernised in part in the 1960s, still has working vestiges of the miniature water gardens dating from its time as a Moorish palace during Ronda’s reign as a minor Caliphate under Córdoba in the 12th century.

Beyond the Palacio, along a pretty cobbled road, is the peaceful Plaza Duquesa de Parcent, which boasts a convent, two churches, including the impressive bell-tower of the Iglesia Santa Maria de Mayor, and a striking Ayuntamiento, townhall building.

For the best views of the Puente Nuevo, head to Plaza de María Auxiliadora and follow the zig-zag path down to the valley below.

Another must see is the Casa Del Rey Moro (House of the Moorish King) with its formal gardens and stepped walk down to the ‘water mine’ carved into the wall of the gorge, which at one time was the only source of water for the entire town.

Not to forget the Arab Baths, the open air auditorium, the Moorish walls and city gates, the Mirador de Aldehuelaand Balcón del Coño viewpoints and the Jardines de Cuenca.

Indisputably controversial, Ronda is also famously the birthplace of modern bullfighting.  In the 18th Century, bullfighter Pedro Romero broke away from the prevailing Jerez ‘school’ of horseback bullfighting to lead a style in which matadors stood their ground against the bull on foot. The Plaza de Toros de Ronda bullring is now a museum and visitors can walk out into the arena.  Entry is around €7 per person.

Opposite the bullring is the pedestrianised high street, Calle Espinel, which caters for virtually everything you could seek to buy from within the traditional, almost regal, old fashioned facades.

Ronda is also the gastronomic capital of the area, with a host of exceptional restaurants.

If you’re looking to push the boat out, try the Michelin Starred restaurant Bardal, from internationally renowned chef Benito Gomez, who is famous for his modern interpretation of Andalusian cuisine.  Bardal has earned a reputation as one of the best places to eat in Andalusia and offers tasting menus from around €85.

If that’s out of reach, Benito’s cuisine can also be enjoyed in the more informal setting of the tapas restaurant, Tragata, where he is also executive chef.