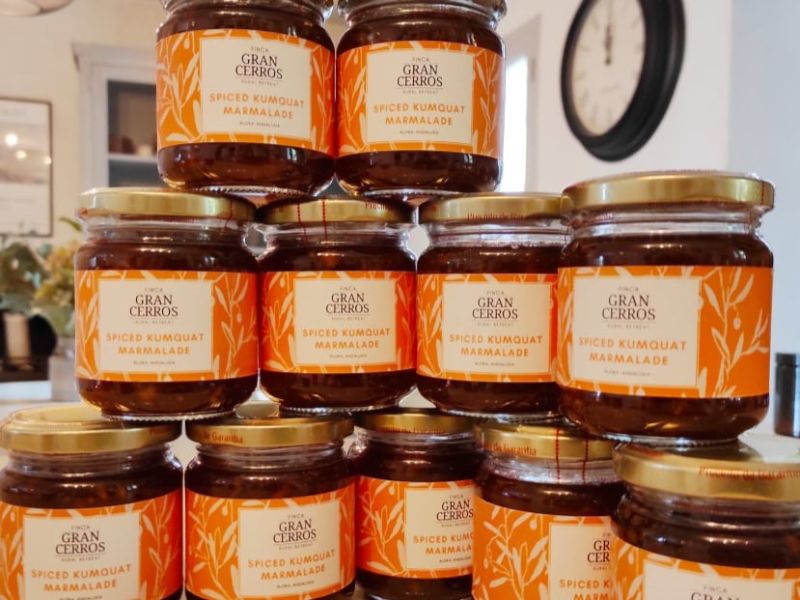 We have just one little ‘Nagami’ kumquat tree here at Finca Gran Cerros, but it’s a very enthusiastic fruiter!

There’s only so many we can munch our way through (eaten whole, straight from the tree), so rather than let them go to waste (or end up pickled in kumquat infused gin!), we decided to make some lightly spiced kumquat marmalade.

We did a couple of test runs last year experimenting with spices and quantities before coming up with a final batch which went down well with guests.  So this year we stuck to the tried and tested recipe – and here it is!

It’s a lovely citrus marmalade that’s not too sharp (kumquats are known for their sweet-tart tang) balanced here with a subtle warmth of cinnamon and ginger. 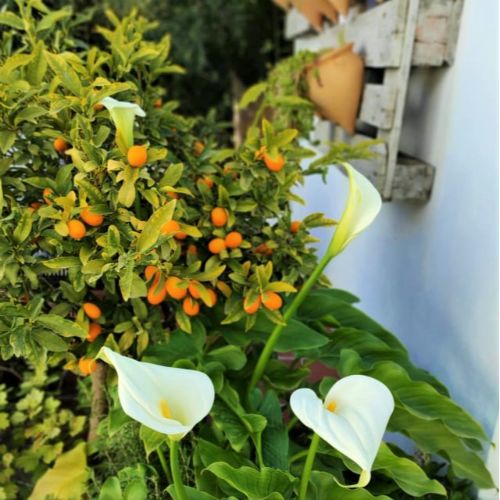 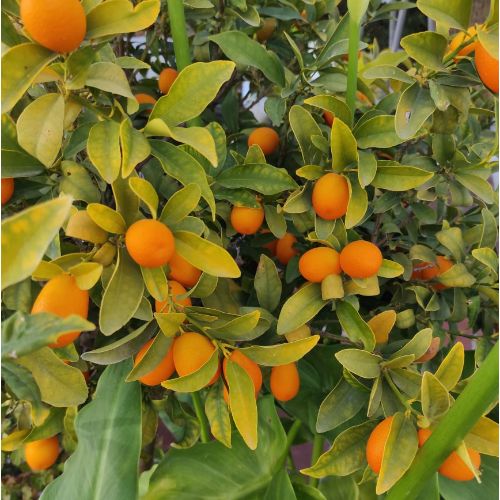 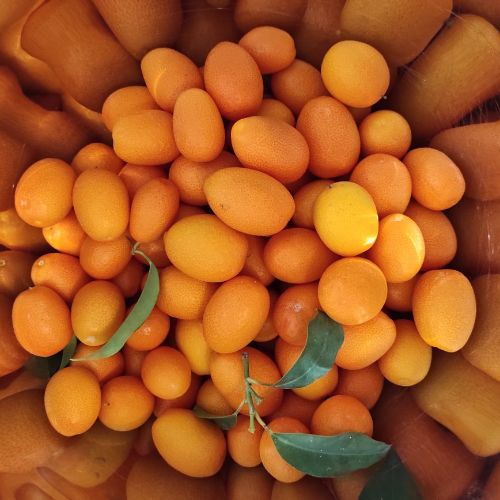 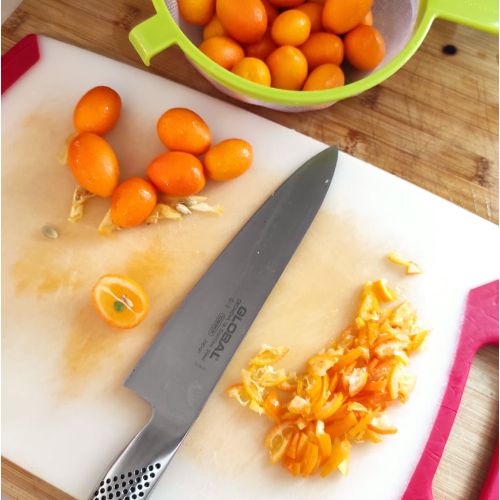 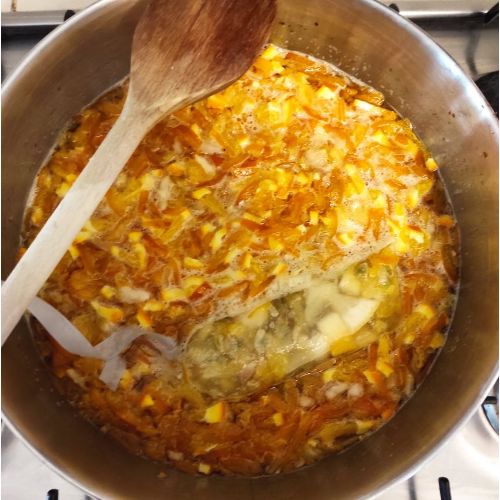 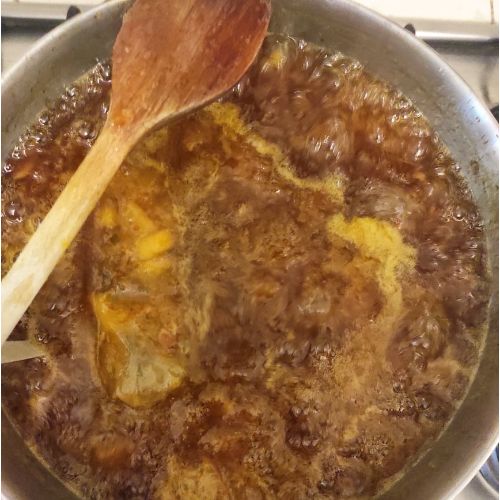 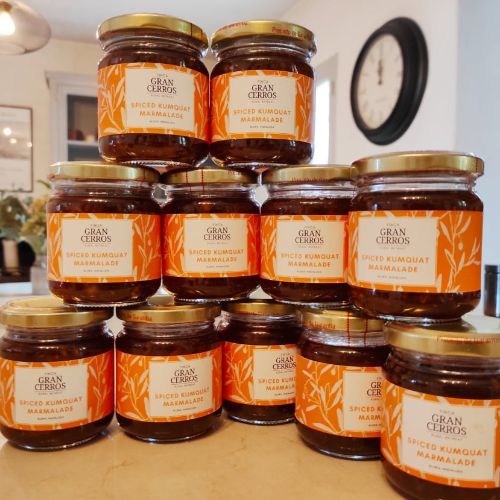 First off, wash then weigh the kumquats before you start faffing with them so you know what quantities you’re dealing with!

We’ve found that the ratio of 1:1:1 of fruit (pre chopping/seeding), sugar and water works really well for kumquats.  It set very well once we’d got the marmalade to ‘setting point’temperature – but we’re skipping ahead!

Chop the kumquats into quarters (lengthways) and remove the seeds and the pithy bit (don’t throw them the seeds or pith – hang onto them for later because they’ll be needed to help the marmalade set).

Then thinly slice across the kumquat quarters (into small tiny strips of peel and flesh) –  the smaller they are , the finer your marmalade will be.  We tried to slice them around 1mm thick – at least to begin with!

WARNING:  It takes a fair while!  You may lose the will to carry on and end up with chunkier shred towards the end – we certainly did!

Once the fruit is chopped, transfer it into a large heavy-based saucepan.

Put the seeds and pith that you held onto, along with the chopped flesh of the juiced lemon, into a bit of muslin (or a new, clean, J-cloth) – we had some tea-infusion filters that are perfect for the job, tied up with a bit of kitchen twine so that they don’t escape into the marmalade as it cooks.  You need these for the pectin that’s in them, but don’t want them bobbing around, lose, in the marmalade; you’d break a tooth!

Add the bag/filter/cloth of pectin loaded goodness into the marmalade, put a lid on or cover it with a tea towel and let the whole thing sit for at least 2 hours to macerate.  It’s a good opportunity to reward yourself with something fun after all that chopping and de-seeding!

We left ours overnight and came back to it the next morning  and it was absolutely fine.

Now the fun bit – heat the sugary fruit mixture, while gently stirring to prevent the bottom catching, until it comes to a rolling boil.

Heat it until it reaches ‘setting point’, which is 105C – check with a thermometer if you have one.  If you don’t put two or three saucers into the freezer and use them to test the marmalade by dropping a teaspoonful onto a cold saucer.  If after 3 minutes it wrinkles on the top when you prod it with your finger, you’ve reached setting point!

If it doesn’t wrinkle, keep boiling for a bit longer until it does!  The length of time it takes depends on lots of factors (juiciness of the fruit, the power of the hob, the size of the batch you’re making etc), but for us took over an hour.

Once it’s reached 105C (or wrinkly status), take it off the heat and let it cool in the pan for at least 10 minutes – it’s really hot and will burn you if it splashes while you’re getting it into jars!

Then spoon or pour into prepared, sterilised jam jars.  We use the dishwasher on an intense programme and them pop our empty jars (and lids) into an oven at 150C to prepare them.

Pop the lids on while still warm (we don’t find a need to use wax discs), and they’re good to go!  They’ll keep like this in a fridge for up to 6 weeks.

All that’s left to do is enjoy the marmalade on hot buttered toast.  It really is deliciously citrusy, balanced with a hint of warmth from the spices.

If preserved properly, the Kumquat Marmalade will keep, unopened in a cool dark place, for up to 12 months – and once it’s opened, keep it refrigerated and enjoy it within 4 weeks (as if it’ll hang around for that long!).