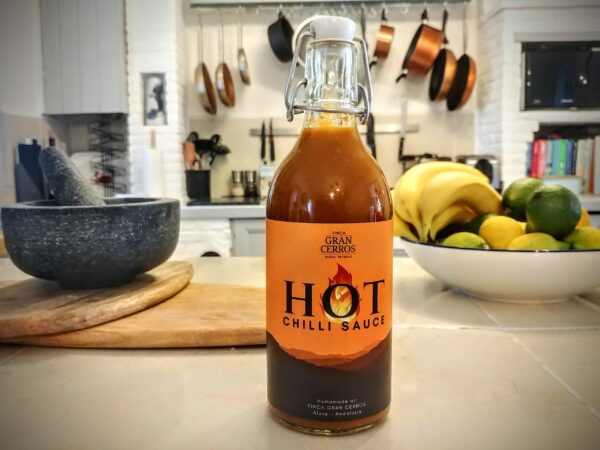 When we reopened in March after renovating the outdoor kitchen and bar area with a brand new BBQ and wood fired pizza oven, we decided to offer guests our own hot sauce…

We’d never made it before so tried a handful of recipes that we found online.  There was a clear winner for us! But almost as soon as we opened, we were closing again as a result of the quarantine imposed in Spain.

By chance, the recipe we landed on was one that involved cooking the hot sauce (it’s really not an effort though), which means it lasts for a good couple of months in the fridge in a pre-sterilised bottle – although it tasted so good, it didn’t last as long as we thought, even being guest-free!

So, today was time for another batch and I thought I’d share it here – just in case anyone is missing their fix of Nandos…

We made a double batch (because we can’t stop eating it) which made a litre of sauce, so the pics are with the recipe quantities doubled.

*I’ve used weight for the liquid because its small amounts and easier to weigh than measure in a jug if you’ve already got the scales out, but you can convert if you’re a puritan!

The first thing to do – even before you get chopping (and there’s a fair bit of chopping) – is to work out what you’re going to keep it in and sterilise the bottle.

We had a couple of empty 500ml kilner bottles that we put into a saucepan of boiling water for 10 minutes, making sure they were on their sides so the boiling water filled the insides.

We used a 50/50 mix of hot red chillies and mild padron peppers for this hot sauce, but depending on how hot you like it, you can mix and match up to the quantity needed.

We weighed before starting to trim, de-seed and chop.

Trim off the stalks and slice each chilli length-ways and scrape out the seeds with the side of the knife.  We like a bit of heat, so left the seeds in around half of our little red chillis.

The membrane in the stubby little padron peppers can be a little bit bitter, so we removed that by chopping off the stalk and then rolling the fat chopped end between our thumb and forefinger, and it just pops out, along with the seeds.  Easy!

Then roughly chop the chillies/peppers – they’ll be blitzed in a minute, so it’s only to help the blending.

PUT EVERYTHING INTO A PAN

You’re going to cook down the hot sauce, so put the wet ingredients (water and vinegar) into a pan* – one that you don’t mind using a stick blender in – and add the peeled garlic cloves and roughly chopped chillies/peppers.

Blend with a stick blender until it’s thin and watery with only fine little bits in it.

Then add the sugar and salt.

Heat the pan until the sauce is boiling, stirring to stop it catching on the bottom.  Then simmer for 10 minutes until it thickens slightly, (there’ll be some resistance to the spoon when you stir it).

Simmer until it’s the consistency of Heinz tomato soup!

It should be the consistency of Heinz tomato soup at this point, and it’ll thicken up further when it cools, so don’t worry if you think it’s a little bit too runny; it’ll be delicious 😉

*if you’d prefer to use a liquidiser, do, and then transfer everything into the pan once it’s been blitzed.

Once it’s at the right consistency, let it cool for 5 minutes off the heat and it’s ready to bottle.

If you like it super-smooth, you may want to put it through a fine mesh sieve at this point (but we like the odd little fleck of chilli skin and seeing that there are some tiny seeds in it somehow adds to the authenticity, so we don’t bother!).

Enjoy with BBQ chicken or steak (or anything you fancy)

We pour ours straight into our sterilised bottles.

The hot sauce lasts really well; for up to a year unopened.  Once opened, keep it in the fridge and it’ll last for a couple of months (although it’s always been eaten much sooner than that!). 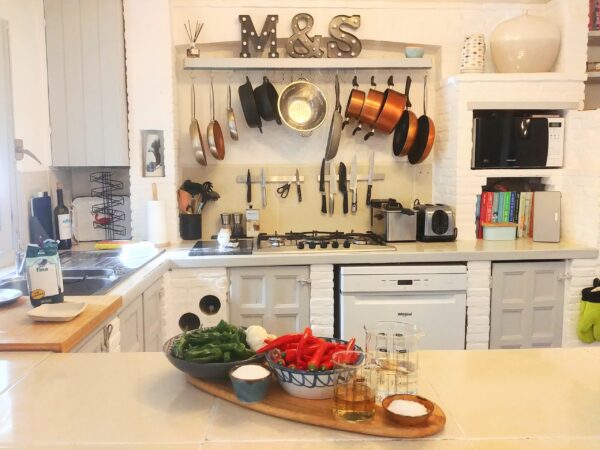 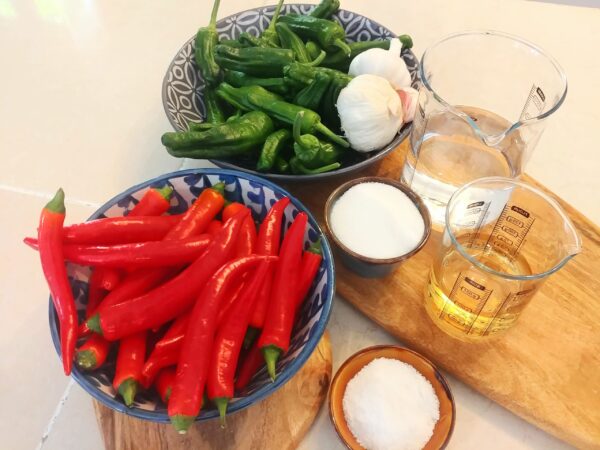 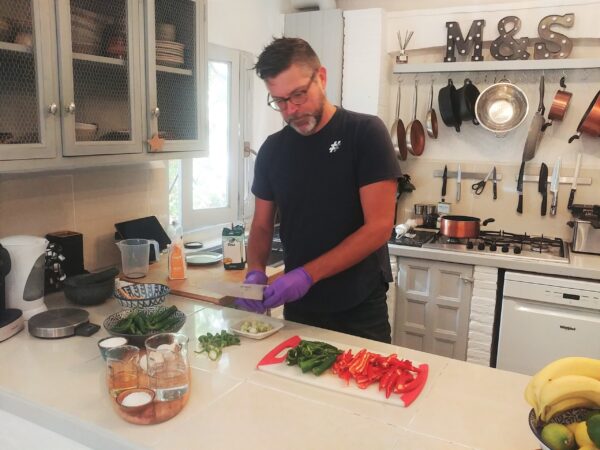 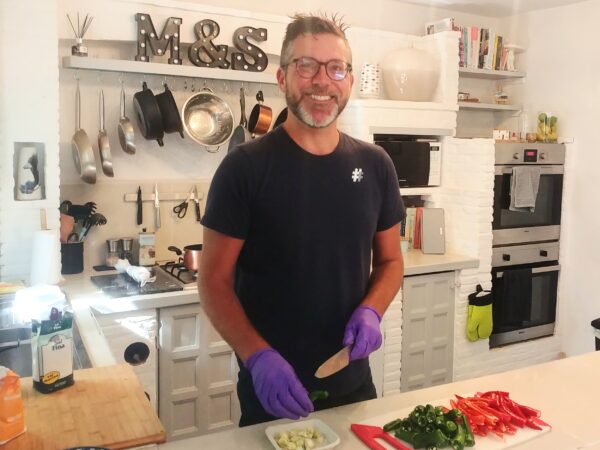 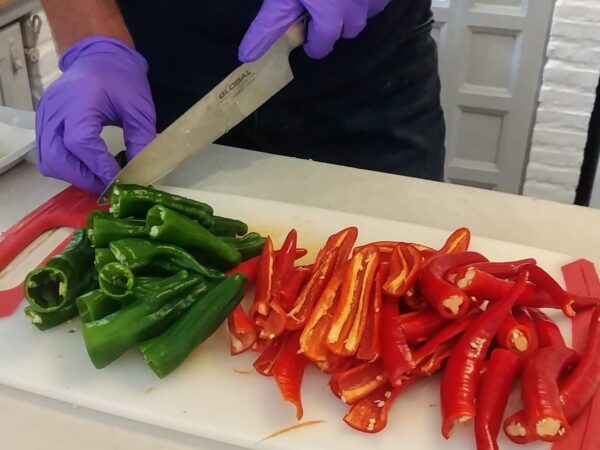 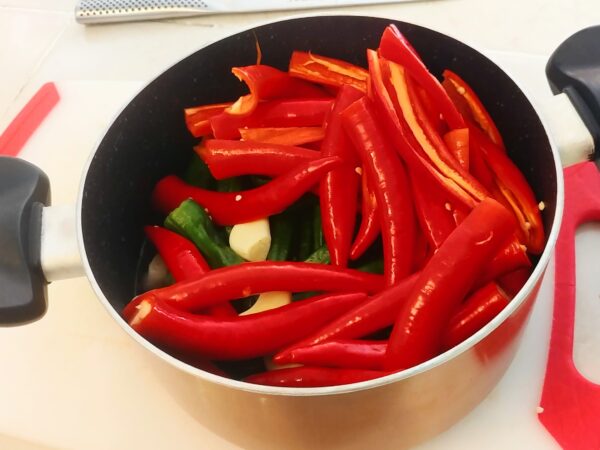 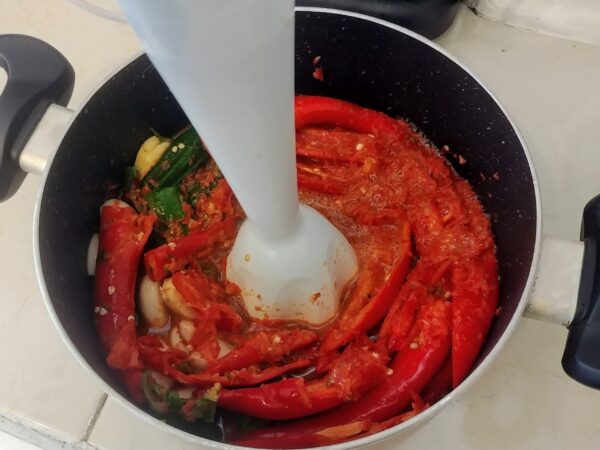 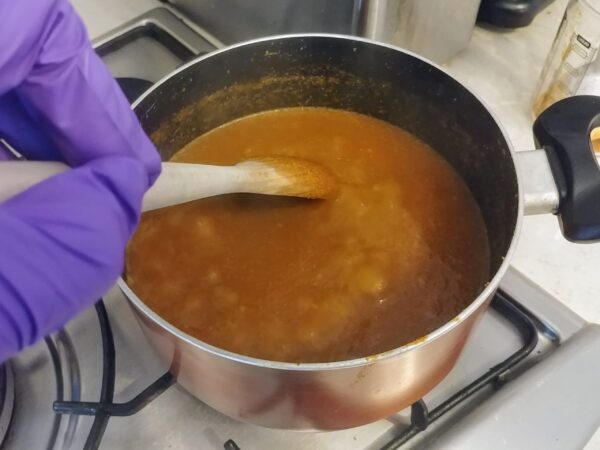 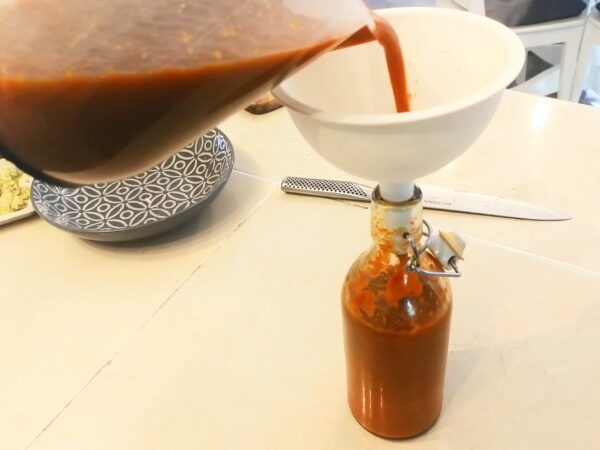 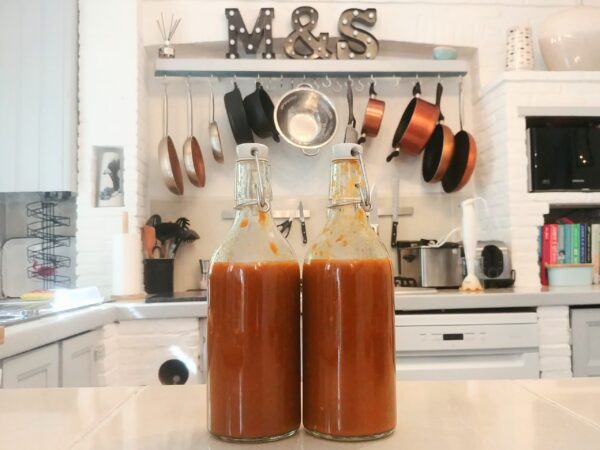 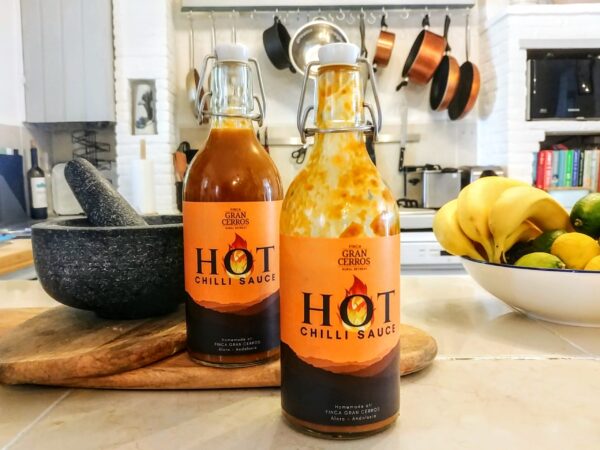 Standard shipping to the UK is temporarily unavailable due to carriers not accepting new parcels. Dismiss