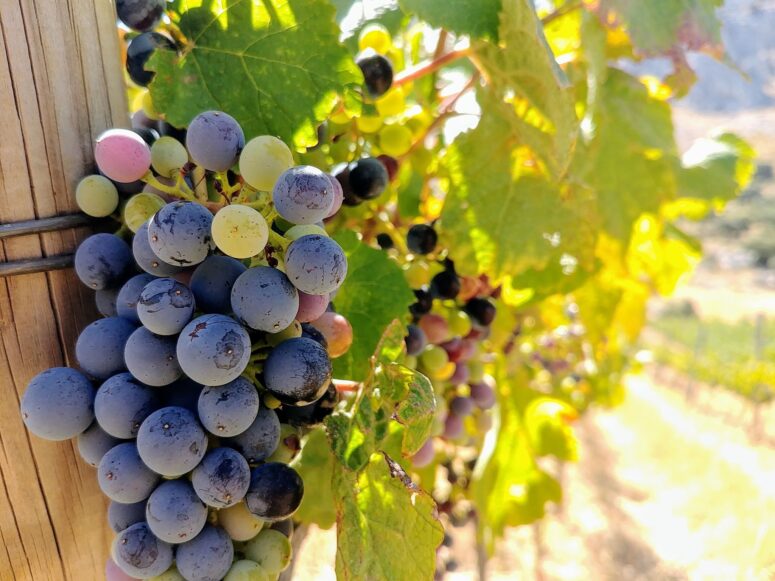 We’ve discovered one of the best kept secrets this side of Álora – and as much as we’d love to keep it to ourselves so that we can be sure to get to visit whenever we want – it seems only fair to share (at least that’s what I was always told as a child)!

Last weekend, between cooking up a batch of Heritage & Cherry Tomato BBQ Sauce and servicing the Quad Bike, we took a trip out with friends to visit Bodega Gross Hermanos – a local winery that’s only around 45 minutes away from us by car.

And I can’t believe we’ve not visited before!

We were warmly greeted by Javier Gross and his family, before enjoying a tour of the vineyard, hearing all about the family’s rich history and their passion for  – and connection with – wine-making, all against the stunning backdrop of the mountains of El Torcal natural park, which dramatically rise from the edge of the rows of vines!

Then followed an extremely informative, yet relaxed and informal, walk through the wine-making process and tour of the winery and the cellar.  Javier was very patient with us wine novices and shared plenty of detail about the process without overwhelming us with information that was beyond our comprehension.  But it’s clear that he knows his stuff inside out and has a real passion for their artisan wine-making craft.

It’s an absolutely wonderful experience, in a magical setting

All of this was before heading back to the Bodega for tasting some of their exquisite wines, accompanied by delicious home-made tapas.

We began with their rosé that was chilled to perfection.  Made purely from Merlot grapes with a short fermentation of only a few hours, it’s not as sweet or fruity as some rosés, which suited our taste-buds perfectly; the consensus was that it was absolutely delicious.

Then followed the ‘Bocatinta’, a blend of Merlot, Syrah and Cabernet Sauvignon grapes, harvested by hand and aged for at least 2 months in French oak barrels.  It’s a deliciously light red wine that went perfectly with the tapas and cheese.

Onto ‘Echos’ next – a slightly more complex Syrah, again aged in oak barrels, followed by a further year of ageing in the bottle.  It was definitely my favourite of all the reds that we tried 🙂

But there was more to come – a deliciously velvety, heavy and complex Cabernet Sauvignon which simply, proudly, carries the name of the Bodega ‘Gross’.   It’s a magnificent wine that’s clearly been produced with love, care and meticulous attention to detail.

Just to prove that I was paying attention during the tour!

This Cabernet Sauvignon is aged for at least 60 months in barrels before a further year in the bottle and it’s a sensationally rich red wine with an aftertaste that goes on and on.  It is definitely one to savour!

We pushed the boat out and treated ourselves to a three course meal too; all home cooked at the Bodega by the family and served alongside their exceptional wines.

It really was a very special and and memorable day.