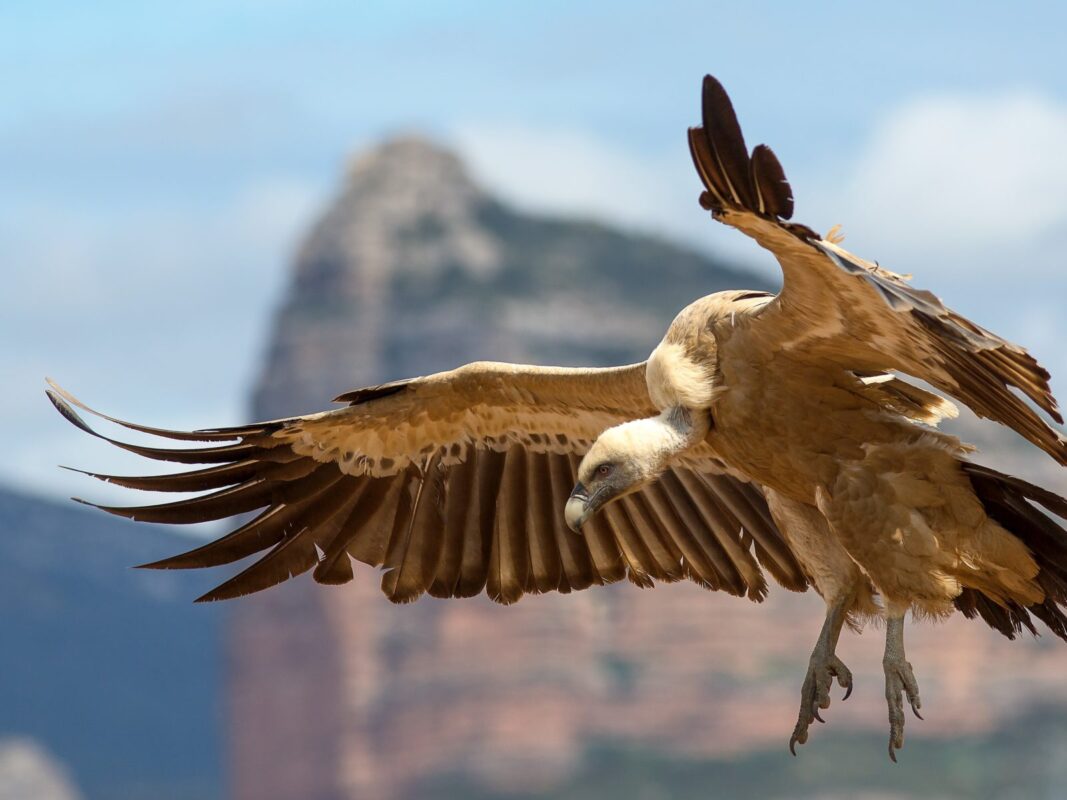 Andalusia is recognised as one of the most important regions in Europe for birding, and Málaga province is a bird lover’s paradise.  Of particular significance are the areas around the Lakes at El Chorro, the nearby River Valley of the Guadalhorce, and the huge salt-water Lagoon at Fuente de Piedra which is home to more than 20,000 mating pairs of flamingos.

Closer to home, the cliff face near the Arabic Castle in Álora, and nearby Pizarra, also offer the opportunity to observe a wide and impressive variety of birds.

Parque Natural Desfiladero de los Gaitanes – or Giants’ Gorge Nature Reserve – near to El Chorro and less than 30 minutes from Finca Gran Cerros is also not to be missed.

The habitat is extremely diverse, ranging from the impressive lakes (reservoirs) to pine forests and higher, craggy, mountainous terrain.

It’s here that you can observe Griffon Vultures with their 8 feet wingspan gathering materials to build their nests during the cooler months of January and February.

The lakes at El Chorro are impressive artificial reservoirs, home to Cormorants, Coots, Mallards, Grey Herons, Little Egrets, Great Crested Grebes, a few Yellow-legged Gulls and hundreds of Lesser Black-backed and Black-headed ones (specially in the Guadalteba and Guadalhorce reservoirs). The mud banks of the reservoirs form wetlands, where you can also find waders such as Green and Common Sandpipers, Snipe and Greenshank, as well as Goldfinches, Greenfinches and Serins.

The lakes are surrounded by Aleppo Pine forests, home to typical forest birds, including Crested Tits, Short-toed Treecreepers, Firecrests and there is a large population of Common Crossbills.

Mediterranean scrub-land is also very common here, with wide stands of Phoenician Juniper (where Song Thrushes, Redwings and Ring Ouzels feed throughout the winter), gorse (from which you’ll be able to hear the persistent calls of  Sardinian Warblers and the shyer one-noted cries of the Dartford Warbler before it pops up for a moment before hiding back down again in the bushes!), and fragrant wild rosemary, the favourite perch of Stonechats and Rock Buntings.

Through the higher rocky areas, it’s possible to spot Black Redstarts, Thekla Larks, Blue Rock Thrushes and Black Wheatears; some of the gems of this fantastic place.

Finally, in the cliffs, as well as the Griffon Vultures, keep an eye out for flights of Rock Doves, Spotless Starlings and Crag Martins, and listen out for the caws of Choughs – they could be warning of Peregrine Falcons or one of the most iconic birds of Málaga, Bonelli’s Eagles.

This bird observatory ‘Observatory of the Guadalhorce River’ is in Pizarra, where the Guadalhorce and Grande rivers converge.  It opened in 2015 as a result of the keen ornithological interest of the area and it’s estimated that up to 190 different species can be spotted here.

For more than a decade, the presence of between 20 and 25 specimens of Black Stork (Ciconia Nigra) that come to winter has been common, so it’s an excellent location from which to observe this rare, endangered species.

If that weren’t enough, easier to hear than to see are Orioles, Nightingales and Tawny Owls.

For those willing to travel a little further afield, the reward can be spectacular!  Around an hour from Finca Gran Cerros, lies Fuente de Piedra Lake.  Covering almost 1,400 hectares, it’s the largest wetland area in inland Andalusia, and one of the biggest in Spain.

Along with 170 other species, the lake’s shallow, salt water is internationally renowned as home to the largest colony of flamingos on the Iberian Peninsula and the second largest in Europe with up to 20,000 mating pairs of flamingos. Early mornings in spring are the best time to see them.

The surrounding wetland is maintained with rainwater and the course of an underground aquifer and the beautiful landscape can be enjoyed all year round.  In summer, when other wetland areas tend to dry up and are hard to find, this becomes a major feeding and nesting ground for all manner of bird life and is definitely worth a visit!