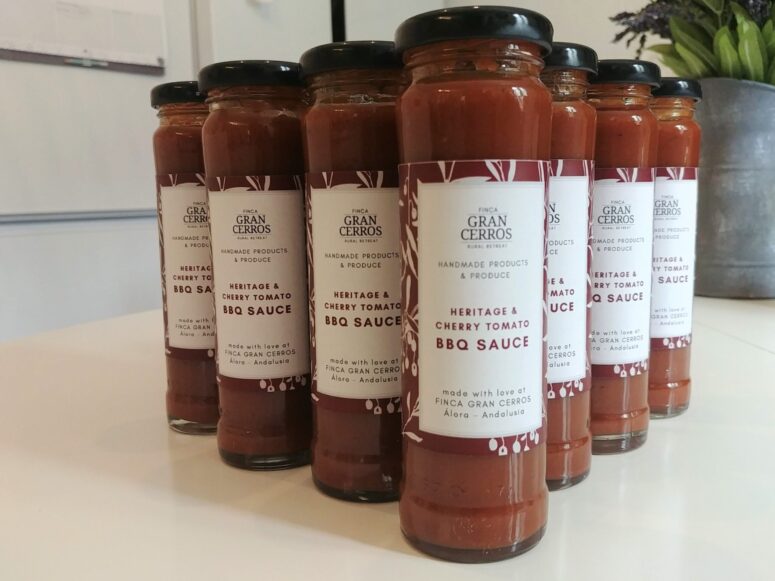 We’re awash with tomatoes at this time of year – they’re two-a-penny in the farm shops – but when our friends and neighbours at Finca La Colina offered us some of their homegrown, organic heritage cherry tomatoes, we couldn’t say no.

They’re delicious and we’d been eating a simple tomato and onion salad dressed with olive oil, lemon juice and thyme for days, and roasting them to have with pasta, and just nibbing as snacks too – but it dawned on us that we weren’t getting through them quickly enough!   And we couldn’t stand the thought if them going bad before we’d scoffed them all.

We toyed with ketchup, but the flavourful heritage tomatoes we’d been given would make a brownish ketchup (fine for us, but guests might think it a bit odd that their beloved ketchup looked more like brown sauce).

The obvious sideways step was BBQ sauce – based on tomatoes, but brown, with lots of added spices, vinegar and some brown sugar. 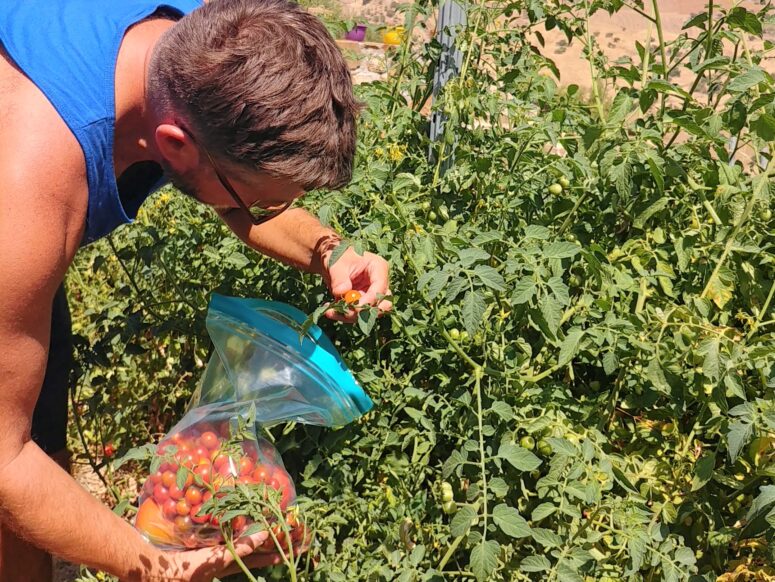 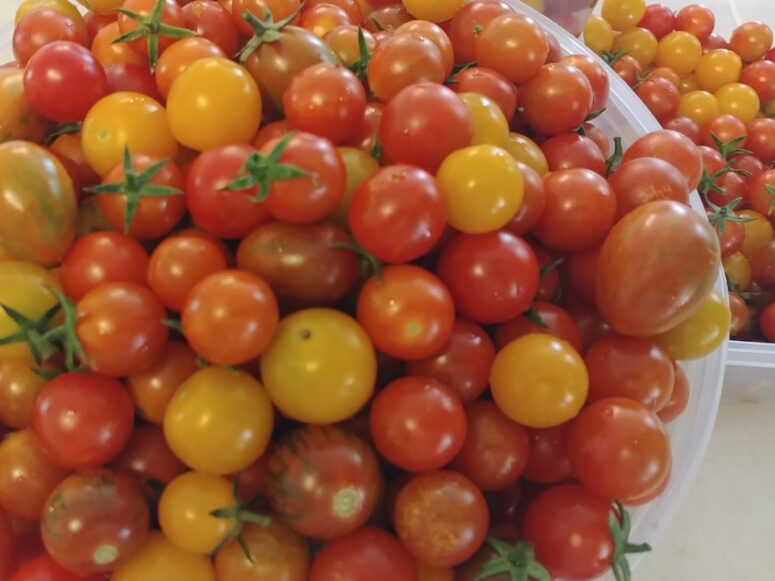 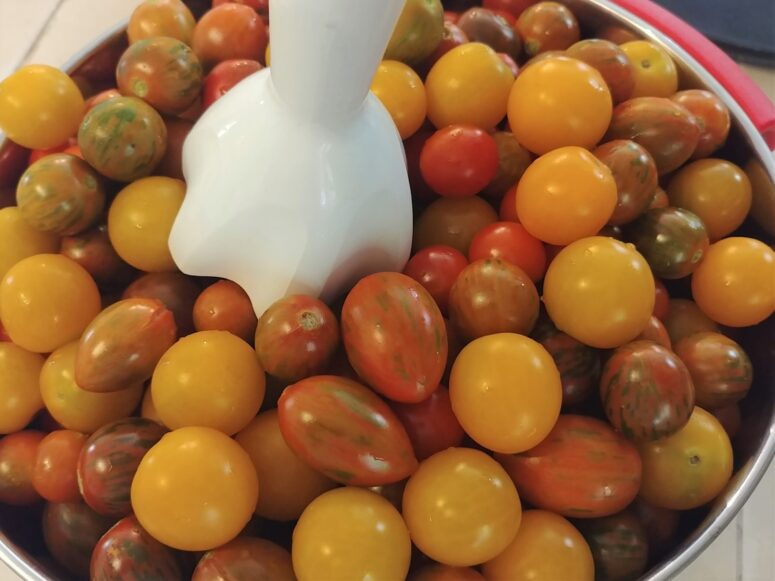 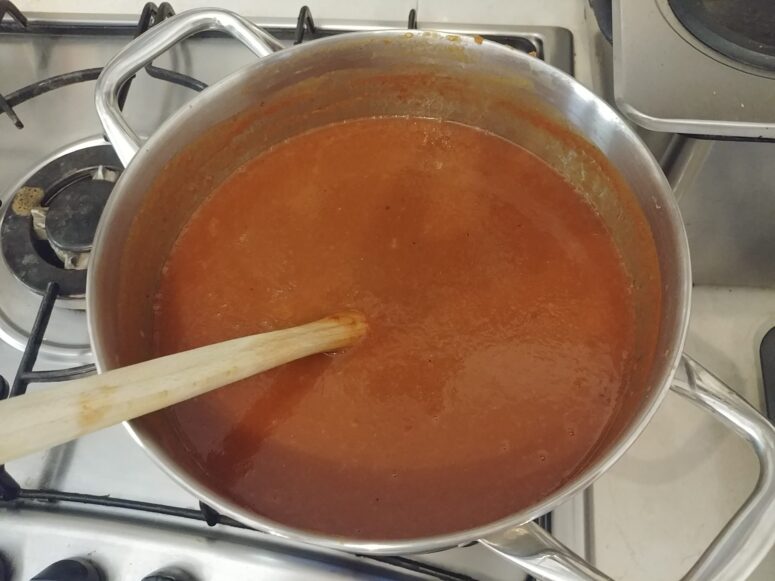 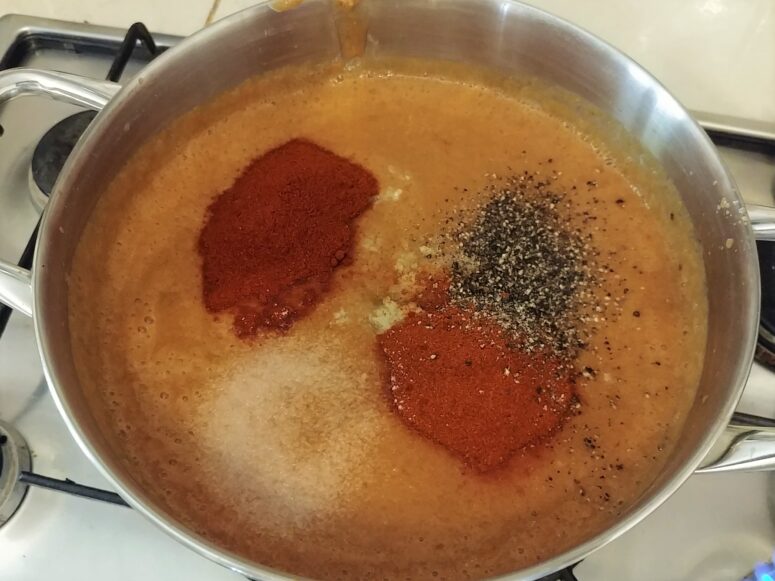 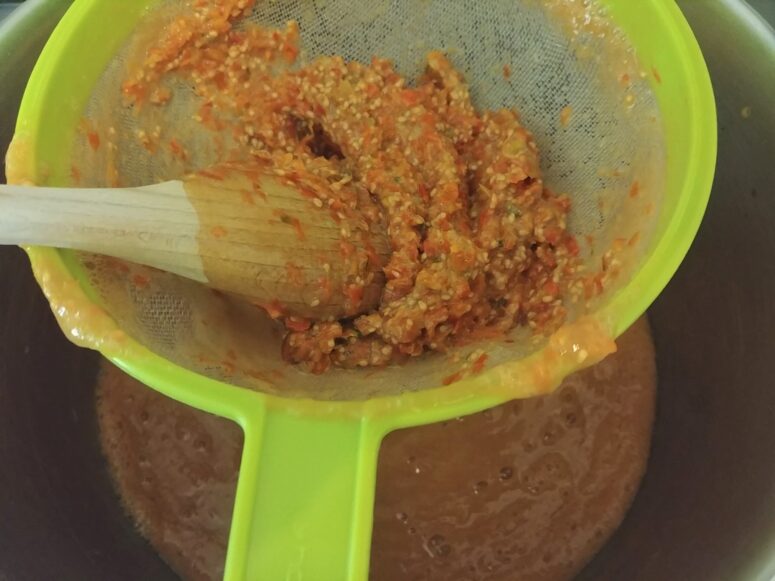 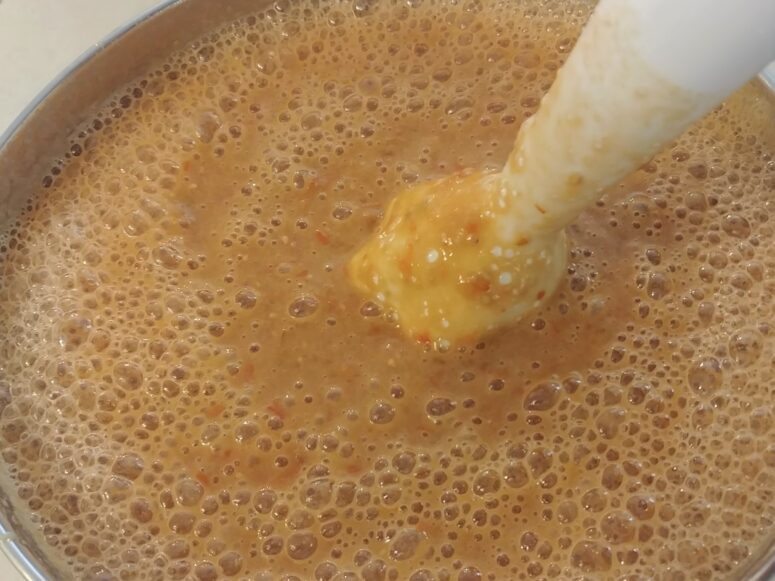 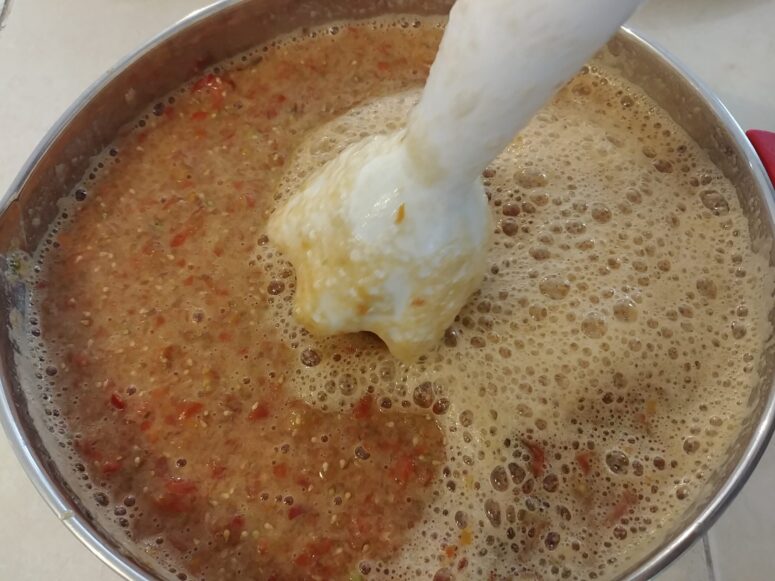 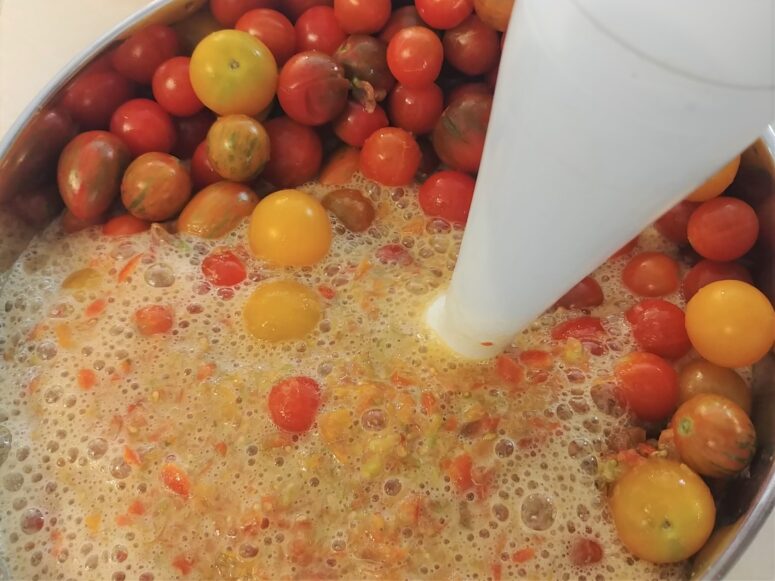 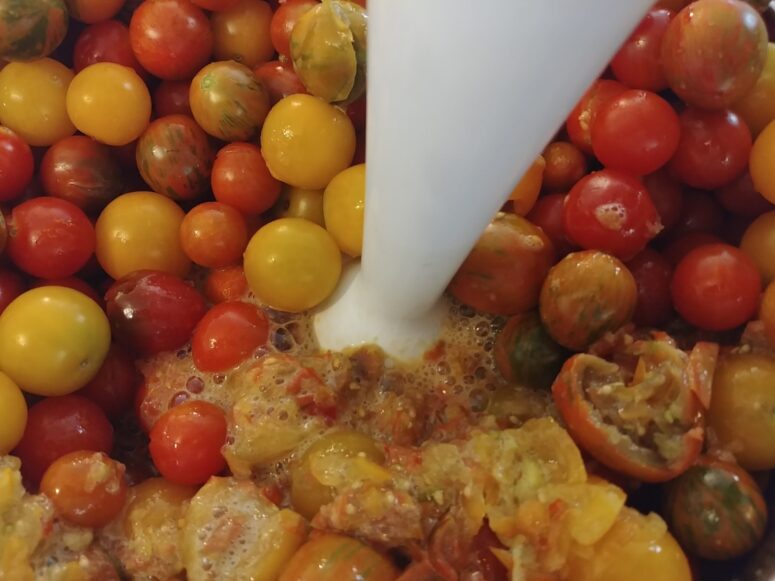 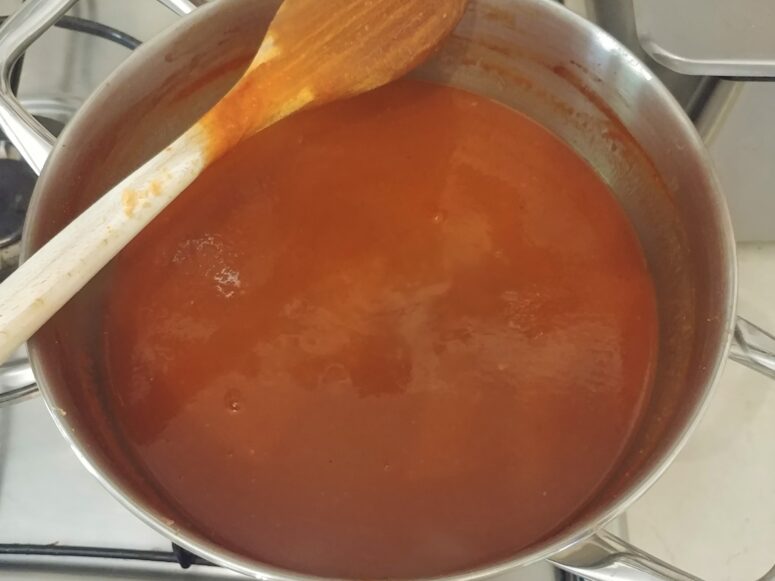 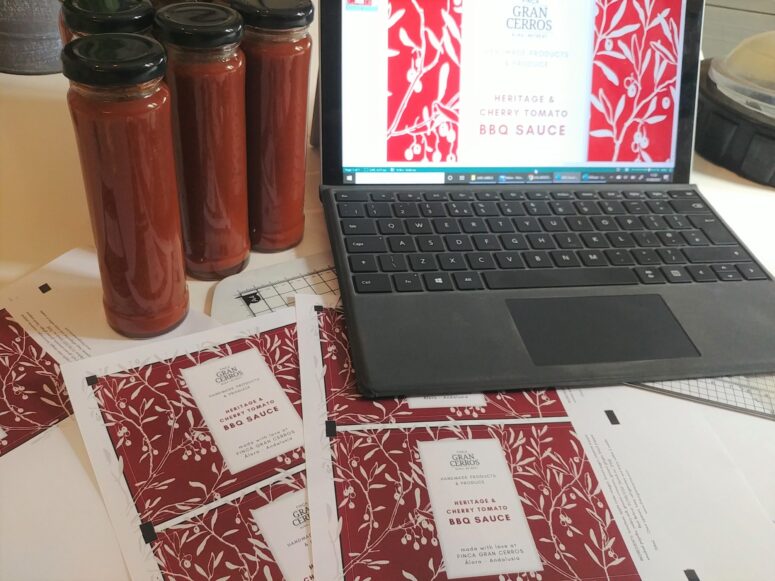 Makes: Around 2 litres – feel free to make 1/3 of the quantity, unless you plan to can/preserve it – or are feeding a lot of people!
Takes: 1 hour 10 mins (10 mins to prep, 1 hour to cook)
Oven: not needed – just the stove top/hob
Feels: Rich and delicious!

*The starting point for this recipe (with a few adjustments) was an American one – after all, they’re supposed to know their BBQ Sauce – so I’ve converted and rounded some the measurements from cups (which I just can’t get my head around!).

First off, remove the stalks and wash the tomatoes before tipping them into a large bowl.

Whizz them with a handheld stick blender until they’re fairly finely blended – or if you’re feeling fancy, get the food processor out and use that, which is a bit quicker (although always seems to take much longer to clean afterwards!).

You’re about to pass the blended tomatoes through a sieve to remove any big bits, so the smoother you can make it, the more tomatoes – and BBQ sauce – you’ll end up with at the end.

We used a mixture of heritage and cherry tomatoes, as well as green/red striped zebra cherry tomatoes, so our bow of tomato mush already looked fairly brown.  If you’re only using red tomatoes, yours might look more like ketchup until you’ve added all the spices!

Anyway, pass the blended tomatoes through a sieve into a large pan and add the crushed garlic cloves.

Bring the tomatoes to a slow boil over a medium heat – and simmer for 45 minutes, stirring occasionally so that nothing sticks to the bottom of the pan.

Then stir in all the other ingredients (the sugar, vinegar and spices).

Bring the pan back to the boil and simmer gently for another 10-15 minutes, reducing it down until it reaches the consistency that you’d like before removing it from the heat.

Remember that it will thicken a little on cooling, but not a huge amount.  We usually aim for the consistency of Greek yoghurt at this stage – spoonable, but not too stiff (sorry if that sounds ambiguous; it’s hard to describe!).

Let it cool for 10 minutes before transferring to airtight bottles or kilner jars.  At this stage, it’ll keep in the fridge for up to a month.

If preserved properly, the BBQ Sauce will keep, unopened in a cool dark place, for up to 12 months – and once it’s opened, keep it refrigerated and enjoy it within 4 weeks (as if it’ll hang around for that long!).